An inspiring forum to Inspire your beliefs, change your physique, optimize your health, and help you to lead the ultimate life you can

» How many weeks to see muscle growth?

NFL star Tony Gonzalez is out to answer a question: Can a football player live entirely on plants?
By REED ALBERGOTTI
January 25, 2008

The protein-rich bounty of the football training table is supposed to grow the biggest and strongest athletes in professional sports. Kansas City Chiefs tight-end Tony Gonzalez was afraid it was going to kill him. "It's the Catch-22," says Mr. Gonzalez, 31. "Am I going to be unhealthy and play football? Or be healthy and get out of the league?" 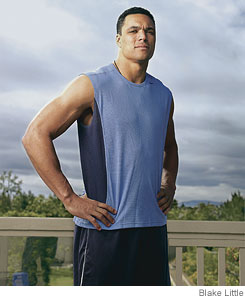 So last year, on the eve of the biggest season of his career, Mr. Gonzalez embarked on a diet resolution that smacked head-on with gridiron gospel as old as the leather helmet. He decided to try going vegan.

Living solely on plant food, a combination of nuts, fruits, vegetables, grains and the like, has long been the fringe diet of young rebels and aging nonconformists. Even the government recommends regular helpings of meat, fish and dairy. Vegans of late have gotten more hip with such best sellers as the brash "Skinny *****," and its more scholarly cousin, "The China Study." Both books argue vegans can live longer.

But could an all-star National Football League player, all 6-foot, 5-inches and 247 pounds of him, live on a vegan diet and still excel in one of the most punishing jobs in sports?

For Mr. Gonzalez, the stakes were high. He'd just signed a five-year contract, making him the game's highest-paid tight-end. Entering the 2007 season, his 11th in the NFL, he had a shot at breaking all-time NFL records for career receptions and touchdowns at his position. To do that, he needed top performances in every game. Mr. Gonzalez knew he was out on a limb. "I was like, 'I'm going to look like a fool if this doesn't work out,'" he says.

Mr. Gonzalez joined a handful of elite athletes who have put the vegan diet to the test, either for their health or because they oppose using animals as food. But he was the first pro-football superstar to try. And the first to fail.

There's no evidence a vegan diet can improve an athlete's performance, says David Nieman, a professor of health and exercise at Appalachian State University. His 1988 study of vegetarian runners found they ran as well as their meat-eating rivals but no better. Although the vegetarian athletes in his study also ate eggs and dairy foods, he says, "there is scientific evidence that veganism, when done right, won't hurt performance." But, he adds, there is only anecdotal evidence that it can help.

Professional athletes, especially NFL players, need thousands of calories a day. Many enjoy a high-protein, high-fat smorgasbord of steaks, chops, burgers, pizza, ice cream and beer. Mr. Gonzalez's tight-end job requires him to push around monstrously sized opponents. Occasionally, he gets to catch a pass. Mr. Gonzalez is famous for combining the brute power of an offensive lineman with the acrobatic skills of a nimble receiver. "My biggest thing is strength," he says. "If you lose that strength you get your butt kicked."

Experts say athletes in training need as much as twice the protein of an average person to rebuild muscle. Their bodies also require a big dose of minerals and vitamins, as well as the amino acids, iron and creatine packed into fish, meat and dairy foods. It's fine to be a vegan, says sports nutritionist and dietician Nancy Clark, if you're willing to work at it. "It's harder to get calcium, harder to get protein, harder to get Vitamin D, harder to get iron," she says. "You have to be committed."

"Skinny *****" co-author Kim Barnouin is working on another book called "Skinny Bastard." "We want men to know that you're not going to be some scrawny little wimp if you follow this diet," she says. The book trashes meat, milk, eggs, cheese and sodas, saying men and women feel better and look better without them. "The more athletes who come forward and say, 'I'm doing this for my health,' the better," she says.

Mr. Gonzalez had never heard of the vegan diet when he boarded a flight from New York to Los Angeles last spring, about a month before preseason training. His seatmate turned down most of the food offered in first class, and Mr. Gonzalez finally asked why. The man told Mr. Gonzalez about "The China Study," a 2006 book by Cornell professor and nutrition researcher T. Colin Campbell that claims people who eat mostly plants have fewer deadly diseases than those who eat mostly animals. The evidence was drawn from diet surveys and blood samples of 6,500 men and women from across China.

Mr. Gonzalez was intrigued. Earlier in the year, a bout with Bell's Palsy, a temporary facial paralysis, had focused his attention on health. He bought the book, and after reading the first 40 pages, he says, was convinced animal foods led to chronic illness. He was an unlikely convert. Mr. Gonzalez, who grew up in Southern California, says cheeseburgers were his favorite food. But he quit them, substituting fruits, nuts and vegetables. At restaurants, he ordered pasta with tomato sauce.

Three weeks later, he walked into the weight room at the Chiefs' training facility and got a shock. The 100-pound dumbbells he used to easily throw around felt like lead weights. "I was scared out of my mind," he says. Standing on the scale, he learned he'd lost 10 pounds.

Mr. Gonzalez considered scrapping the diet altogether and returning to the Chiefs' standard gut-busting menu. First, though, he called Mr. Campbell, who put him in touch with Jon Hinds, himself a vegan and the former strength coach for the Los Angeles Clippers basketball team. Mr. Hinds suggested plant foods with more protein.

The Chiefs' team nutritionist, Mitzi Dulan, a former vegetarian athlete, did not believe that was enough. With the team's prospects and Mr. Gonzalez's legacy at stake, she persuaded the tight-end to incorporate small amounts of meat into his plant diet. Just no beef, pork or shellfish, he said; only a few servings of fish and chicken a week.

Teammates nicknamed him China Study and razzed Mr. Gonzalez if he missed a block. But he wasn't ready to give up his new diet completely. After a preseason practice, he accompanied Mr. Hinds to learn a skill he believed as important as blocking techniques: how to shop for groceries. Mr. Hinds showed him nutritious fish oils and how to pick out breads dense with whole grains, nuts and seeds. "The best bread for you," says Mr. Hinds, "is if I hit you with it, it hurts." Mr. Gonzalez also learned how to make the fruit and vegetable shake he drinks each morning. He stocked his pantry with tubs of soy protein powder and boxes of organic oatmeal; soy milk and Brazilian acai juice crowded the fridge. His favorite dessert became banana bread topped with soy whipped cream from the vegan cafe near his home in Orange County's Huntington Beach.

Mr. Gonzalez soon recovered his lost pounds and strength, but prospects for a record-breaking season were still in doubt. The team lost its starting quarterback, Trent Green, in a trade, and the Chiefs' star running back was tied up in a contract dispute.

As the season progressed, the team lost more games than it won. But Mr. Gonzalez managed to stick to his diet and hold onto the football. He broke the touchdown record before midseason and was within reach of the career reception record. "I was like, 'OK, this is working,'" he says. "I have so much more energy when I'm out there." His wife, October Gonzalez, was astonished her husband could play the season without ordering a single cheeseburger. "I thought he'd cave," she says.

Mr. Gonzalez entered the final game against the New York Jets needing four catches to surpass the record held by former tight-end Shannon Sharpe. The contest turned into a sluggish defensive struggle with the Chiefs trailing the Jets 7 to 3. Still, Mr. Gonzalez made three receptions. With 2 minutes and 29 seconds left in the third quarter, Chiefs quarterback Brodie Croyle was fleeing defenders when he threw a 9-yard pass to Mr. Gonzalez, who scampered for a first down and a spot in the NFL record book.